Watch As Kwesta Proposes To His Beloved Wife, Yolanda

Hello Mzukulu lovers, do we by chance still remember who Kwesta is? Kwesta is obviously one of the top faces in the South African hip-hop world, with lots of music.

The biological name of the South African singer is Senzo Brikka Vilakazi, he was born on 11th August 1988 and he popularly known as Kwesta.

He was born in Katlehong, Gauteng, the township is also known as “K1”, in South Africa.

It is safe to say that he began his music life in 2003, then he was just 15 of age, he and his close pals then created a rap group which they called Ghetto Fellaz from which was later renamed to The Juvenylz, same year.

Kwesta currently is signed to his own record label, an independent media company which bears the title RapLyf Records and also has anothr dope hip-hop artiste as his co-founder, Kid X.

Almost a decade ago he released his first debut studio album which bears the title, Special ReKwest in 2010 then his second album came in 3 years after, DaKAR in the year 2013, the album climbed to number 3 on the South African iTunes Hip-hop and Rap chart.

His greatness got consolidated with his third studio album which bears the name, DaKAR II in 2016, the album has some singles like; “Ngud’, “Ngiyazifela Ngawe,” “Nomayini”, “Day Ones”, “Mmino” and “Mayibabo” in it.

His second version of the DaKar album was certified Platinum 7 times by the RISA Recording Industry of South Africa.

He then sold about 210 000 copies just in South Africa, DaKAR II in 2016 was said to be the tyop selling hiphop album of all time

Just last year, he dropped off his 5th studio album which is g.o.d Guluva, the project took at number 3 in the South African music chart.

His music career has been a bliss, and recently he came up with a news that made us all happy.

Kwesta took to his Instagram account to show how he officially proposed to his dearest wife who bears the name Yolanda Vilakazi.

Well, the shocker is that the duo have been together, married and happy, but Kwesta probably wants to renew his vows with his pretty wife, amazing stuff!

As you may guess, his proposal raised a lot of questions as his fans and friends began to question, why did Kwesta have to propose, yet  again?

His wife took to her Instagram page to share the wonderful moment from the proposal, and she really expressed excitement over her man’s act.

She wrote, and we quote, “Okay now that I’ve processed… My husband definitely surprised the hell out of me. I was never ready! Wrote,”.

Check out the posts below: 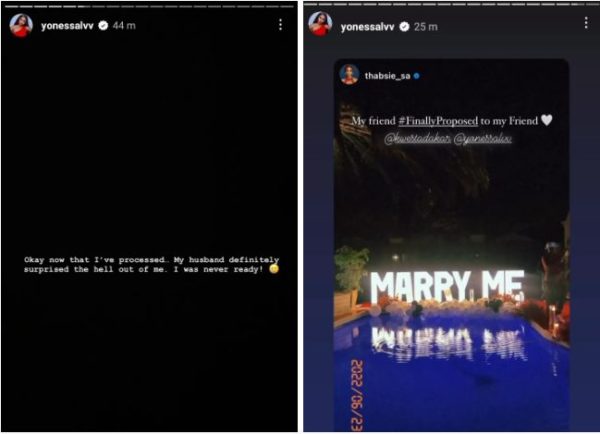